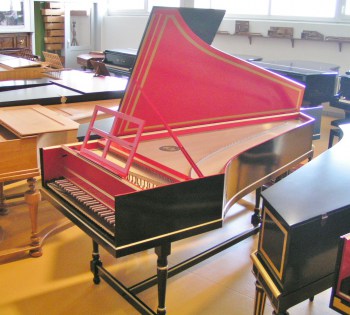 Product Availability: Out of stock

François-Étienne Blanchet (1695 -1761) was the most famous member of a family of instrument makers which influenced French harpsichord building decisively during the 18th century. His father, Nicolas Blanchet (born in 1660), a native of Reims, set up his workshop in Paris and started making harpsichords and spinets. Besides making new instruments in his workshop in the rue de la Verrerie, François-Étienne also extended the compasses of early Flemish harpsichords of the Ruckers family (mettre à grand ravalement) to 5 octaves in accordance with thecontemporary trend.

François-Étienne Blanchet was also the master of Pascal Taskin, the most eminent French maker of harpsichords during the second half of the 18th century. After the death of François-Étienne‘s son in 1766 (who bore the same name as his father), Pascal Taskin married his widow and led the tradition of harpsichord making to a last climax. Among the surviving instruments made by Blanchet, there is only one single manual harpsichord left, which was rediscovered a few years ago in France. This instrument, built in 1737 by François-Étienne Blanchet, is the original for our copy.

We use cookies on our website. Some of them are essential for the operation of the site, while others help us to improve this site and the user experience (tracking cookies). You can decide for yourself whether you want to allow cookies or not. Please note that if you reject them, you may not be able to use all the functionalities of the site.